America’s founding fathers understood that our rights come from God. Government today cannot violate the Bill of Rights without violating the 10 commandments.  They realized God was saying through:

Quick overview of the Biblical Basis of The Bill of Rights

In this interview with The New American’s Alex Newman, Liberty Christian Fellowship Pastor Earl Wallace explains that the Founding Fathers’ understanding of God -given rights, including those listed in the Bill of Rights, was a thoroughly biblical view based on what God revealed in the Bible. The pastor also explained that there are ultimately only two value systems: the Ten Commandments, and everything else. Everyone should work to ensure that governments adhere to those commands–no murder, no theft, no lying, and so on. Pastor Wallace explains that the “separation of church and state” lie is behind much of what’s wrong today. He also exposes the Black Lives Matter movement.

SCOTUS Uses The Camp Constitution Flag Case To Further The False Premise Of “Separation of Church and State,” and implement other nefarious and unconstitutional processes to undermine our beloved USA!

This link below is to my sermon on Jan 23, 2022, explaining how America was founded upon the application of the Bible to civics, and not on “separation of church and state.” I also explain how SCOTUS undermines the Biblical Basis of America’s freedoms by making rulings that cite concepts not actually found in the US Constitution. I detail from reports of the January 18, 2022 SCOTUS hearing, how the Camp Constitution Free Speech Flag Case is in danger of being misused to further undermine the benefits God bequeathed to America through the historical body of Christ, known as America’s Founding Fathers. 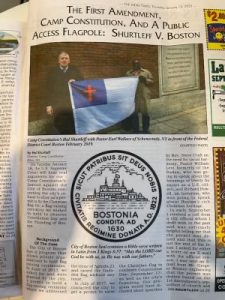