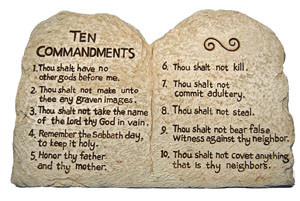 Here’s the answer — in case anyone asks you.
The Preamble to The Declaration of Independence says, “… the Laws of Nature and of Nature’s God …”
Thomas Aquinas articulated that “Natural Law” is stated by Divine Law, in The Declogue of The Ten Commandments.
Thomas Aquinas says, “Further, the Divine law is more perfect than human law.  … It is therefore evident that since the moral precepts are about matters which concern good morals; and since good morals are those which are in accord with reason; and since also every judgment of human reason must needs be derived in some way from natural reason; it follows, of necessity, that all the moral precepts belong to the law of nature;…“Honor thy father and thy mother,” and “Thou shalt not kill, Thou shalt not steal”: and these belong to the law of nature absolutely. And there are certain things which, after a more careful consideration, wise men deem obligatory. Such belong to the law of nature, … And there are some things, to judge of which, human reason needs Divine instruction, whereby we are taught about the things of God: e.g. “Thou shalt not make to thyself a graven thing, nor the likeness of anything; Thou shalt not take the name of the Lord thy God in vain.”
(http://www.nlnrac.org/node/230#100-1)
John Locke believed that the only reason for the existence of government was to preserve natural rights and, by extension, man’s happiness and security.
http://www.u-s-history.com/pages/h1206.html
Thomas Jefferson reflected this in The Declaration of Independence, which says, “We hold these truths to be self-evident, that all men are created equal, that they are endowed by their Creator with certain unalienable Rights, that among these are Life, Liberty and the pursuit of Happiness.–That to secure these rights, Governments are instituted among Men, deriving their just powers from the consent of the governed,
John Locke also stated, “However, not all men chose to live within the confines of the natural laws and presented threats to the liberties of the others. At this stage man entered into a social contract (compact) in which a state (government) was formed to guarantee the rights of the members of society.”  http://www.nlnrac.org/earlymodern/locke
James Madison, Jr. American statesman political theorist, and 4th U.S. President, said ”We have staked the whole future of American civilization, not upon the power of the government, far from it. We have staked the future of all of our political institutions upon the capacity … of each and all of us to govern ourselves, to control ourselves, to sustain ourselves according to the Ten commandments of God.” — James Madison, 1778, before the Virginia State Legislature.
Thus, Pastor Earl Wallace concludes from Aquinas, Locke, Jefferson, Madison and others that
“America’s Founding Fathers designed The Ten Bill of Rights, to “form a more perfect union,” that compelled Government to secure the natural rights God gives each of us.  This is accomplished when government treats “we the people” according to The Decalogue of The Ten Commandments!”  (See “The Biblical Basis of The Bill of Rights.”  https://www.youtube.com/watch?v=-ANfp6d1ce4
For Christ and Country, Pastor EarlPastorEarl@LibertyCFChurch.org
View the Biblical Basis of the Bill of Rights Presentation